In this session my focus left the “games” Karuhat had taught me and fell to working more on my distance and weight distribution. I want to be close enough to...
by Sylvie May 24, 2018

In this session my focus left the “games” Karuhat had taught me and fell to working more on my distance and weight distribution. I want to be close enough to touch hands, not hop out (defensively). And I want to put my weight on my front foot. With my weight on that foot my power kick and my check to my open side becomes pre-loaded, like when the hammer of a gun is cocked. Both offense and defense on the open/power side vs Orthodox is loaded. In terms of distance touching-hands distance opens up the straight knee game that has become a major focus of the style that Karuhat is creating for me, and allows me to make use of my cardio advantage as well. As a knee fighter he is bringing a Muay Khao version of his own femeu style. Karuhat was originally a Muay Khao fighter and became more Muay Femeu when he moved to Bangkok. These ultimately aren’t opposite styles because you can be artful and thoughtful as a Muay Khao fighter as well. For Karuhat this is mostly composed of the continuity he is teaching, the ability to just move forward in the conversation. 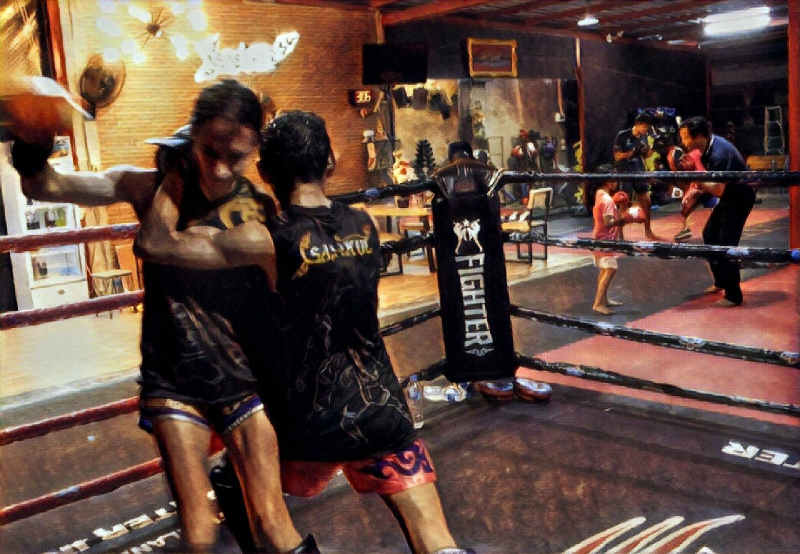 perfect shot of some of the mechanics of the Cascade Throw

In the extended trailer clip you can see the fantastic outside trip that he’s taught me a couple of sessions ago, that is a superb counter to a defensive knee or hips in by your opponent.  I’m calling it a Cascade Throw because of its two stages. They do flow to together, but it helps when learning it to feel first the “step through”, and then the shoulder pull-over. This is a trip that can potentially be a foul if you put your leg behind their leg – you cannot trip using the back of your leg – this is solved by putting your head on your opponent’s shoulder, and more properly stepping next to and past your opponent. You ultimately pull your opponent over the top of your thigh, not tripping them with the back of your leg. The image above is in the middle of the ring, but In our sessions together this outside attack became a major part attacking a defensive fighter up against the ropes. Attack the body, punish to the outside of their knees come up or hips go in. Episode 14. Above is a free 5 minute extended clip, but you can watch the full 64 minute commentary video of this session on Vimeo On Demand. Purchase of the video lends support to legends of the ring as Karuhat gets 55% of the net proceeds; patrons get a substantial discount (you can purchase Episode 14 after the trailer below, or look to Episode 14 in the full list):   watch all the free videos in this series

My dedication is to the study of Muay Thai and the preservation of its techniques and culture as both a fighter and a journalist-documentarian. In my 6+ years of living in Thailand I have fought more than 200 times, more than any western man or woman.
No Comment