The Secrets of Karuhat’s Style – Four Internal Games From Southpaw

these are key or blueprint to the kind of tactical thinking embodied in Karuhat Sor. Supawan's fighting style 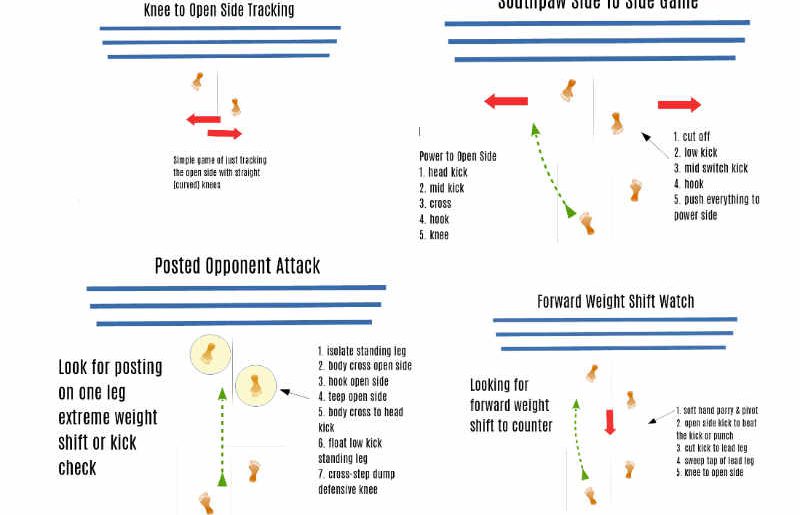 I’m not entirely sure that these blueprint diagrams will make much sense without viewing the long commentary sessions Sylvie is doing on vimeo, but maybe they will. I’m presenting them here as cheat notes for what is going on in those sessions because the way that Karuhat teaches is essentially done through guided sparring. Sylvie does explain what is happening at any given time, but it seems helpful to extract some tactical principles that at least I see are going on, and that Sylvie and I talk about in review. This is really extraordinary footage as it’s like having Baryshnikov teach you the waltz, simply by slowly waltzing with you. Karuhat again and again places Sylvie in sparring contexts meant to draw out these kinds of tactical principles, which I’ve come to call “games”. A Game is a small game within the larger game of fighting, with it’s own rules and techniques. From what I’ve been able to see Karuhat thinks in these micro games, and is pushing Sylvie slowly through them, in a process Sylvie and I compare to learning how to read...and once you know how to read, it’s how you perceive.

I don’t have the time to exhaustively detail these, but I will be adding to the article as more games reveal themselves over the month. I’m hoping that they will help those watching the videos, and also that they will creatively trigger thoughts for fighters and practitioners at all levels. Perhaps the most foundational principle of all these games is learning how to see or read the Open Side. The Open Side is the direction the belly button faces in your opponent’s natural stance. If your opponent is an Orthodox fighter the open side will be to your left when facing her/him. But, the Open Side will change throughout the fight, if only for a moment. If you finish a round kick, your Open Side has changed. If you bring your rear foot far enough forward to check, your Open Side has changed. If you walk forward for a step, or you miss with a teep, your Open Side has changed. Thais track and see the Open Side wherever it is, and strikes landed to that side score higher (unconsciously in the aesthetic) than they do on the Closed Side. A significant part of these games is in tracking the Open Side, and because these Games are organized here for Southpaws much is about bringing the power side into it’s natural attack to the Open Side that sits opposite it when facing Orthodox fighters. As a Lefty much of your style concerns itself with this. You have to defend your Open Side against your opponent’s natural power, and deliver your power to their Open Side.

Karuhat switches a lot against Sylvie in these sessions. He’s a natural switching fighter, but I think he’s also training her brain to track the Open Side, which on him will move back and forth. All these games are transposable to Orthodox fighters, all that is required is quick lead leg switch steps, or walking into favorable stances, but for the sake of clarity we’re just talking about Opposite Stance match ups. 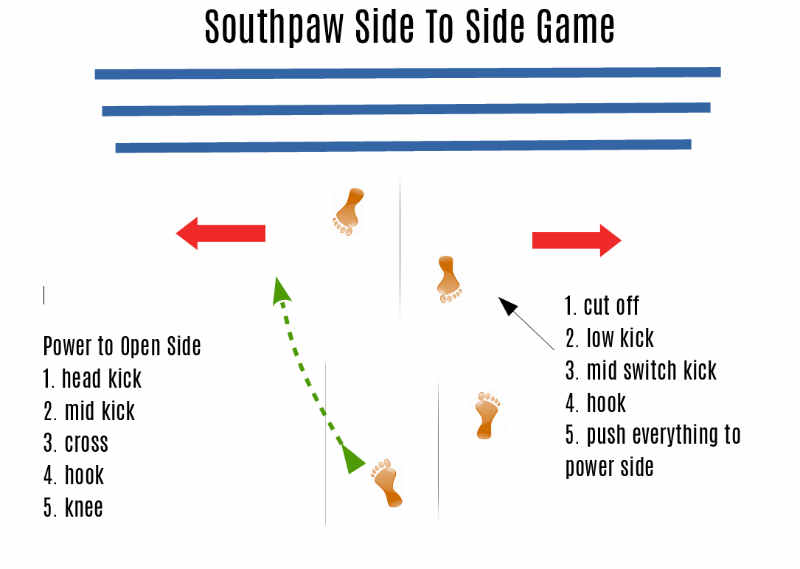 Most of these games are most effective with the opponent on the ropes, but they can be played anywhere in the ring I supposed. The reason why Karuhat chooses the ropes is that they limit the opponent’s degrees of freedom. With her/his back to the ropes there are only three fundamental directions to move: left, right or forward (I won’t talk about the lean back over the ropes which is also available, something you’ll see Karuhat use against Sylvie very frequently). The Side to Side Game makes use of the core Southpaw advantage of having power opposite the Open Side. It is used to funnel the opponent into your power. It’s as simple as using your lead side weapons and cut-offs to give your opponent only one avenue of escape, then anticipating this and punishing it primarily with a high scoring mid-kick. It’s has lots of subtlety too because you may start off harrying your opponent to your right (away from your power) so you can properly begin the funneling in your own due time. If your opponent is square to you, you may force them to your right just so you can start the Game with a cut-off or outside kick. One of the advantages of the eventual forcing of your opponent to your left is that you can easily back-foot them for second, depriving them of the rear leg check on your rear kick. The timing of this back-footing can create easy kicking opportunities, and it is one of the things that comes with reading. 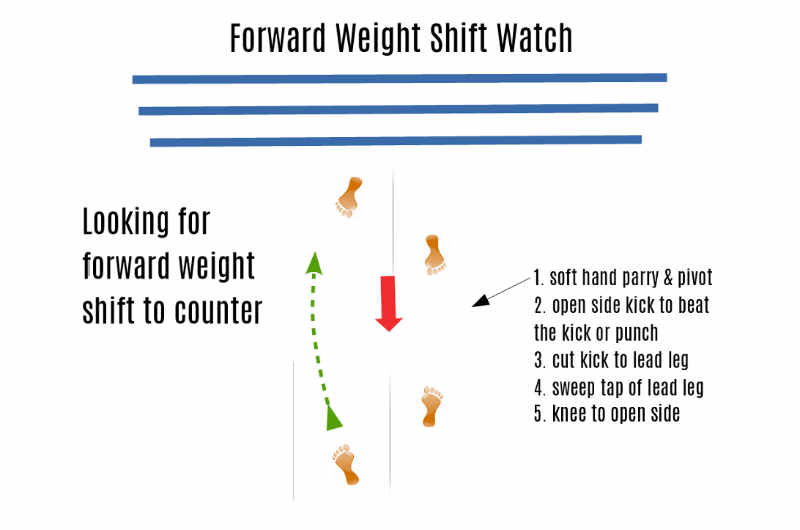 When you aren’t pushing your opponent along the ropes, side to side, you will often find yourself fairly square with them. It may happen in the corner, or just mid-rope, but this Game is a big part of what Karuhat does. Here everything is eyes. He is looking for the forward weight shift that signals a kick or a cross (power against your Open Side). This is one of the reasons behind his own personal attack style that frequently involves a false “tell”. He will often lead with his chest rising a little, or with a head dip, to trigger the eyes of his opponent. What he does with this tell is that he’ll either force the opponent to check defensively (limiting their movement options), and produce his attack a beat slower than anticipated, or he’ll hide attacks by removing the tell. He’s always playing with forward weight signals. But, when watching his opponent he is very clued into seeing the forward weight shift. This is a core part of the “reading” he is teaching Sylvie. When you are able to counter ON the shift it can feel that you are inside your opponent’s thoughts, beating them on the strike. This is something you see Saenchai do all the time to western opponents. He’s watching the weight shift of often fairly stiff opponents. The primary counter on the weight shift is a kick to the Open Side. This is high scoring in Thailand and can be a power shot. The Game of Weigh Shift watching can devolve into an assortments of fakes and counter fakes between two fighters. If this results in forcing a check in your opponent you can move to Game 3, Attacking a Posted Fighter.

Aside from just trying to jump the gun on the weight shift with a rear kick or knee, once your opponent is coming forward Karuhat likes a few counters. If she/he reaches you with hand pressures he likes to softly parry down and pivot out to kick. The lead leg can also be cut or sweep-tapped. In the Karuhat Intensive video series though you’ll see him repeatedly on the ropes lean exaggeratedly forward and hold the beat, so Sylvie can start picking up on this as a trigger. 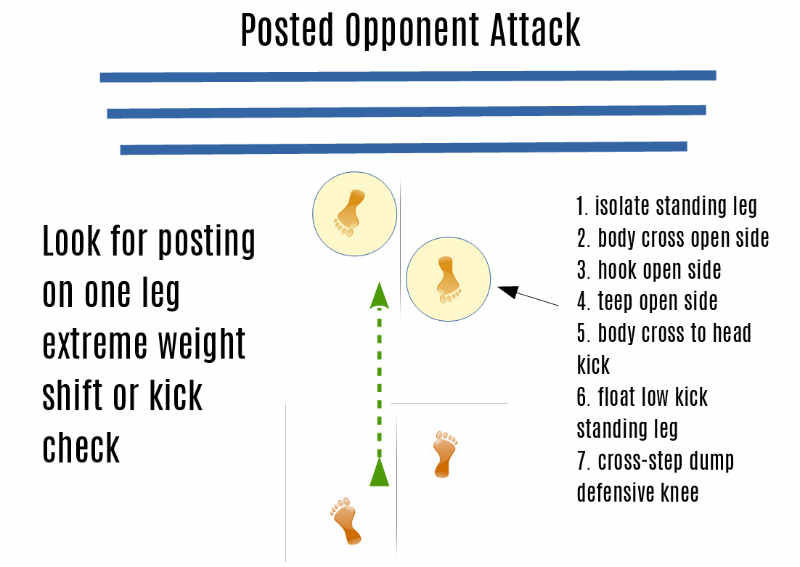 A second Game within a more squared off situation is attacking the posted fighter. When a fighter is on the ropes and raises their leg to check a kick they are posted. Their degrees of freedom are highly reduced. When a fighter is back-legged (put on their back foot) they are also posted. And when a fighter turtles they are posted (though on two legs). In this game the read is on their standing leg. Most of Karuhat’s posted attacks are to the torso. Body shots and teeps punish a rear leg check against a feigned kick. He also has a version of the body cross that morphs into a head or mid-kick if the opponent is able to draw themselves backward into the ropes, onto the back foot. There is a micro game within the game that consists of simply attacking the standing leg with low kicks, or hooking the Open Side (away from the standing leg), wherein you could just go back and forth. The posted fighter is harried and attacked in all 3 weak points in a kind of whack-a-mole. Standing leg, head, body, round and round. 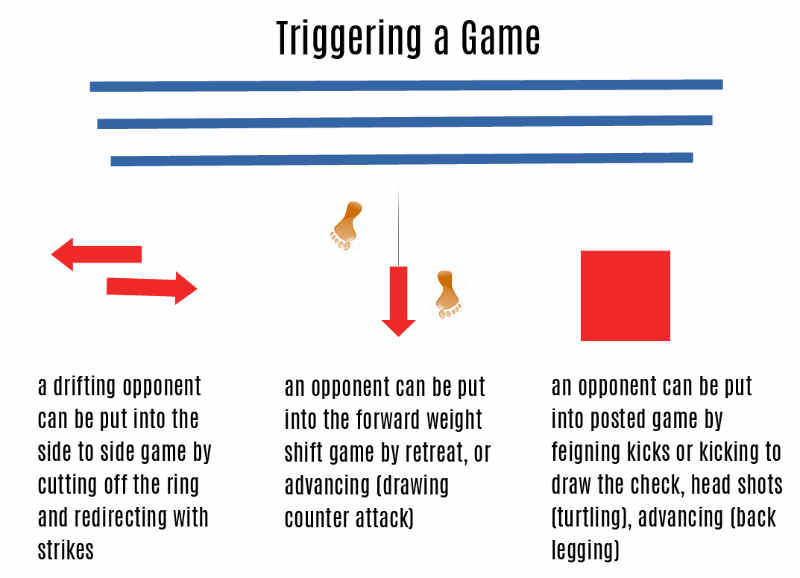 Aside from simply reading a thorough-going opponent, Karuhat is also constantly moving between them purposely. It is not just taking what your opponent gives you, but also putting them into a Game they seem not adept at themselves. It’s the switching between Games that keeps your opponent guessing, and when you can put them there they may not entirely be sure what Game they are in at any one time. This has been one of the early frustrations for Sylvie in this kind of teaching because it’s a lot of reading. One of the keys she’s discovered when finding herself stuck in a Game she isn’t doing well in is to switch to a Game she feels confident in. It could be something as simple as kicking the standing leg, or drawing a check so she can body punch or teep. By limiting the focus you can re-calibrate, get comfortable, and then expand experimentally into a new Game. 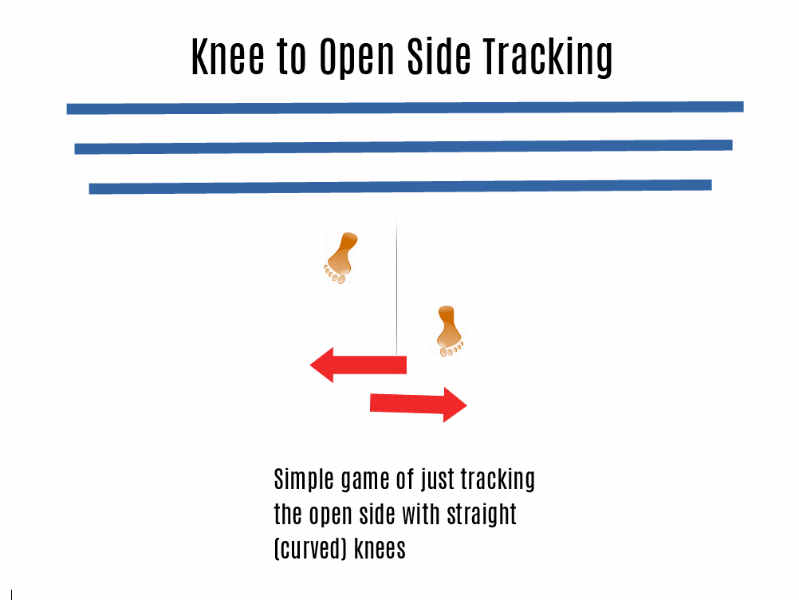 This was a very small Game Karuhat introduced yesterday, just to show how Games can evolve. It’s a Game that fighters like Lungsuan or Yodkhunpon played very well. It is a tracking game where you just track the Open Side, fighting close and knee that side, making use of the skip-step knee when necessary. It can evolve into a kind of Side To Side game where you set up for the power left knee, but usually it’s just a hemming game, offering lots of points and punishment. There is a knee technique that you optimally need for this, a straight knee that has a curve to it (which follows the retreating opponent), but it makes for a very nice Open Side pressure, no matter where your opponent turns on the ropes, and compliments hand combinations nicely. You can see Yodkhunpon’s version of the (slightly) curved knee (which is different than Karuhat’s which is longer) here:

Of course there is no limit to these kinds of Games. What is helpful is to see them in this chunked way, embodying deeper principles of attack, in that they eventually evolve into the full reading of your opponent. Weight transfer, delay, Open Side vulnerability, standing leg posting, much of what Karuhat is doing is working to limit the degrees of freedom that your opponent is capable of. It means that she/he becomes more predictable, more anticipated. If you come to realize that from a position they are only likely to do 2 or 3 things (instead of an imagined 8), you can become much more adept at reading which one it is going to be, and seeking out the natural hole or weakness that displayed.

If you aren’t following the Karuhat Intensive sessions yet on vimeo I urge you to because there is nothing like it in the history of documenting a personal Golden Age fighting style, we’re watching the blueprinting of an entire and unique fighting style right before our eyes – as cameraman I’m amazed at what I’m seeing while I’m standing there. The Games illustrated here may help you get more out of these fantastic videos. Or, if you are a patron you can find these Games in the sessions Sylvie has posted in the Muay Thai Library there.

I'm Sylvie's husband and through her I've come to have a huge passion for Muay Thai, it's techniques, history and culture. I support her through handling all the digital and social media planning.
One Comment