Epiphanies In Training the Brutal Climb: Music, Rhythm and Vision 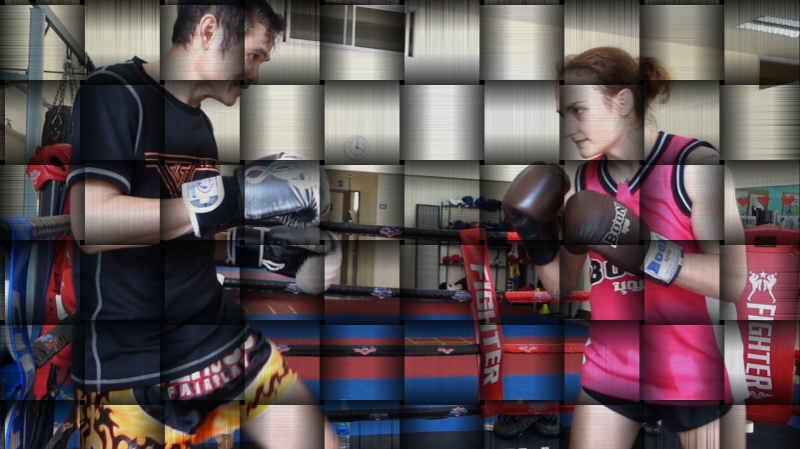 The Training Notes segment of The Karuhat Intensive project is mostly going to be written by me, Sylvie’s husband, though I also hope that Sylvie will write a few things too. Most of what she’ll be doing in terms of reflection will be found in her training vlogs and in her video commentary found in all the full length footage. I’m just an onlooker with the distinct advantage of being very close to Sylvie, and having watched first hand her develop from a sincere early student in the New Jersey basement of Master K, into the western fighter with the greatest number of fights in Thailand, in history, now with over 200 fights. My goal in this is just to give some 3rd party perspective, but also it’s the just release a degree of…what I might call aesthetic tension…over what I’ve been witnessing, and what I will witness. With this Karuhat Intensive project, something so important we have attempted to set up an entire website to support it, Sylvie is starting to scratch at some of the deepest layers of Muay Thai, things that not only seldom get talked about, but are almost never taught. It’s the amazing good fortune of Sylvie – and I just have to admit it, she’s a magical person who somehow in the karmic involve of the universe produces opportunity out of seemingly nothing – Sylvie going to be training with one of the most effusively dexterous, stylistically untouchable fighters in the history of the rings of Thailand. If you aren’t connected to the Muay Thai of Thailand it’s hard to know just how respected and admired Karuhat was as a fighter. I think to myself that maybe he’s something like the Joe DiMaggio of Muay Thai, someone who among fans who actually saw and lived through him invoked a smh reverence: “nobody better”, even though his is not a name like Babe Ruth, Ted Williams, or Willie Mays. It still stuns me that we are going to be filming this man everyday, and laying down commentary. It will stand as the greatest documentation of a legendary fighting style ever to be done. That’s why we had to create a website for it. Perhaps I went too far afield, this is a training notes series, but I want readers and supporters to realize the context, the framework of the coming month. In Patreon there is already maybe 8 hours of Karuhat’s instructive training published. We are going to add something close to 45 hours of consecutive training, with commentary, published in (near) real time.

Make no mistake, this will be the hardest thing Sylvie has ever done – and I say that about someone whose fought every 11 days for the last 6 years, something I’m not sure any fighter, male or female regardless of nationality, has done. This is going to be harder than that. And I can’t wait because Sylvie is completely up for it. She’s going to crush this, on the way to her unearthly goals. But compared to all of that this is still mind boggling. There is nothing we could do other than to dive right into it and try to bring as many of you along for the ride.

So what am I talking about, why so hard? I’m going to leave aside just the fact that she’s aiming to train with two legends of the ring – Karuhat Sor Supawan and WBC World Champion Chatchai Sasakul, one-on-one every single day, and I’m going to leave aside that in the evenings Sylvie will then be training at what I believe is the toughest gym in Thailand, Dejrat Gym, home of the Thai National team – this gym is tough not because of how hard they work, and they do, but because of the unique character of Arjan Surat who breaks you down mentally, especially if you speak Thai, only to build you up, to break you down, to build you up, etc., fashioning a harder and harder personal steel; and I’m going to leave aside that each evening when she gets home exhausted from that gym she’s going to sit down and do film review of the morning’s training with Karuhat, as she voices over for everyone what we will the be uploading and posting to Sylvie Study for patrons. I’m going to leave all that aside. What is going to be so hard is what it is that Karuhat is teaching her. It will pull at the very nerves of what Sylvie is made of, the passages at which an animal, its faculties, takes in the world.

Sylvie and I talk a lot about what exactly it is that Karuhat is teaching. He pretty much hates holding pads, and he doesn’t really work on technical dimensions. What we came to realize – and Sylvie talks about this in her vlog – is that Karuhat is teaching Sylvie how to read. Not “read” as in “look closely and observe”, but actually to look at the body as if it is composed of letters. Okay, this might seem a little out there, but bear with me. Shapes. What he teaches her though a kind of slow, constant sparring – stopping onto the break into a correction or admonishment – is to recognize the shapes and positions of an opponent, and to read what they mean. It’s like “seeing openings” but it is much more than that. That would be like calling Reading “hearing sounds”. Hopefully this is something that Sylvie can really bring out in the hours of commentary that she’s going to be doing over the next month, but he is actually teaching Sylvie literacy. Yes, you can fight quite a bit, and have pretty good success if you learn your combos and bite down and throw them over and over AND over. A lot of kickboxing fighting is like this. But the reason why Thais fight so differently than everyone else – and they do – is that they are literate readers. It’s the reason why Saenchai can face some pretty competent western fighters and just completely overwhelm them, looking like he’s in the matrix. It’s because he is in the matrix. He’s got night-vision while everyone else is feeling around, or popping out their memorized combos, looking for openings. Karuhat, one of the greatest feel fighters Thailand has produced has been teaching Sylvie how to read already in the many long form (Karuhat) sessions available on Patreon. The elements of what they are going to do are already there. But now it’s immersive. Every single day.

In fighting Reading entails: feeling the space and directing it’s stricture, seeing the shape of the body and recognizing it’s support (legs, balance), recognizing the Open Side and seeing when it changes, using rhythm to lull and delay to slip past, creating tension to make your opponent more readable. None of this falls within the realm of combinations or even techniques. Sylvie’s been kind of blessed – and cursed – as a fighter. Combinations have always been an anathema to her. She couldn’t throw one to save her life. She does not trust them. This forced her to be without one of the great cheats of fighting. When you can’t bluff your way through space with aggressive, memorized action you are forced to live on the edges of fighting in all the small things. This is one reason why she became a clinch fighter. In those small spaces she could fight for dominance. What Karuhat is doing, and it began most sincerely when he switched her to Southpaw to erase much of what was, is teaching reading, literacy. Installing new software, or an even better analogy, a new operating system. Now the problem with “reading” in this sense is that if you aren’t very far along with it it is almost useless. It’s like sounding out words letter by letter, not something that is even close to reading per se. And under stress much of what you learn is just thrown out the window because the body trusts what the body trusts, and nothing else. In order for reading to work it has to completely take hold. It has to invade your perceptual mechanisms. It has to become not only the “what” but also the “how” of seeing. That’s why it has to get into the nerves.

Why I say that this is going to be the hardest thing Sylvie’s ever done? Sylvie had a problem with violence. I’ve written about what I believe Sylvie’s doing through her voluminous fighting. I believe she’s building a new house out of a house smashed by violence. A house of techniques, culturation, rites and will. Fighting. Renown kru in Chiang Mai Andy Thomson was fond of saying: When the student is ready the teacher presents himself. It is insane that Karuhat as a teacher has presented himself to Sylvie. It’s almost out of a Kung Fu movie. He’s not a kru who actually has students. Something in him. And something in her, found each other. And he wants her to see. It will be the hardest thing in the world, as fatigue starts to build up over the repeated days, and as a student seeks to please the teacher, to let go of the old way of seeing (or not seeing). The body knows, and has stresses build the old grooves of perception tenaciously grip in like iron talons. You can not shake them free. Karuhat will patiently guide Sylvie through the perceptions of reading, he is incredible at this, but only by letting go of the old assurances of what is real (faculties of perception) and allowing oneself to see, a new, will vision take hold. Honestly, I’m honored to be a part of this. No second of it will be wasted, every moment will be earned. And it is incredible that others like you will be allowed to come along.

The Brilliance of Karuhat – Training Vlog #2

I'm Sylvie's husband and through her I've come to have a huge passion for Muay Thai, it's techniques, history and culture. I support her through handling all the digital and social media planning.
No Comment